How To Be More Productive

How To Be More Productive 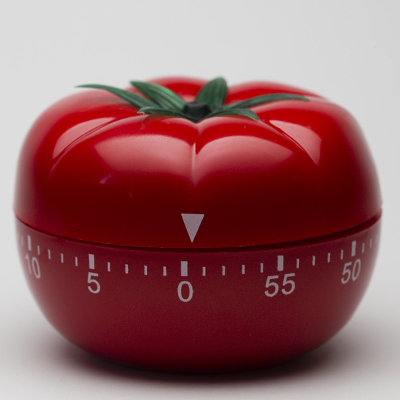 The key to a productive workday may be the tomato. Not in the sense that eating more tomatoes will make you smarter; instead, we’re talking about the classic tomato-shaped cooking timer that counts down from 25 minutes. It turns out that 25-minute-tomato increments could be the most effective way to accomplish your work.

The Pomodoro Technique
We’re talking about the Pomodoro Technique, a time-tested productivity strategy that’s been popular since the 1980s. What is the Pomodoro Technique you ask? In a nutshell (or in a tomato sauce can), people attack tasks with 25-minute bursts of intense and focused work, followed by a five-minute break. It may seem counterintuitive to work like this because it seems like you’ll be getting more done if you grind away at a task for one, two, or even three straight hours, but according to proponents of the technique, they feel like they’re getting way more done by harnessing the power of the tomato.

Here’s a testimonial about the Pomodoro Technique by software developer Paul Kipp:

You might think that a person could do 16 of these cycles in a day. I’m lucky to get more than two in a day without interruptions. But in those 50 minutes I get more done than I do in the other seven hours of my work day, at least in terms of advancing the most important aspects of my most important projects.

Take it from Francesco
Can you really get more done in two tomato cycles (totalling 50 minutes) than in a typical seven hour workday? It’s hard to argue with success, and the Pomodoro Technique has been around long enough that it’s credited by several people as the secret to their success. The productivity technique was first developed by then-college student Francesco Cirillo. Because Francesco first used a tomato-shaped cooking timer, the imagery stuck and the timer is now synonymous with the popular productivity technique.

Like the complexity of tomato paste when more herbs are added to it, what originally began as a simple technique aided by a cooking timer has turned into an intricate productivity school of thought. Pomodorotechnique.com offers the disciples of Francesco with books, courses, and of course, tomato timers. You can tell from the website’s introduction video just how well thought out and organized this technique has become.

For example, instead of using a tomato-shaped cooking timer, you can use a 25-minute playlist on your mobile device of the most intense music that gets you pumped and ready to take on the world. You can use your favorite calendar app to organize your day the Pomodoro way, and the technique is especially relevant for today’s smartphone culture that feels the urge to check social media with every notification. Trust us, going 25 minutes without checking your email isn’t as bad as it sounds.

Are you ready to change things up and bite into the Pomodoro Technique? Or does this sound too messy to implement at your office? Share with us your thoughts in the comments.