How Bandwidth Works (and Why It Matters)

How Bandwidth Works (and Why It Matters) 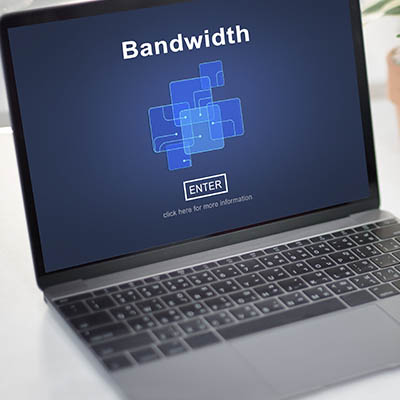 Computer systems, especially for business, are more intensively used than ever. If you use multiple technologies, including VoIP, webinar platforms and screensharing, you’ll need multiple internet connections, often at the same time. To ensure that they’re working optimally, it’s essential to have enough bandwidth for them to run. Here are some of the reasons why you need to understand bandwidth and how to avoid bandwidth problems and keep your operations running optimally.

That’s a tough question, because there are actually a whole lot of kinds of bandwidth. Instead of going into the complicated technical detail, it’s easier to look at it from another angle. The most important thing to realize is that bandwidth is not simply the same as the speed that data is transferred within a computer system.

Think of it like this. You’re in a busy fast food outlet and a busload of hungry people arrives to get themselves something to eat. They all pretty much want to order the same kind of meal (let’s say burgers and fries). The person behind the counter processes their orders at a consistent rate and, though there are lots of people ordering, in time all the orders are logged and sent to the kitchen.

But what if there are two people serving behind the counter, both processing the orders with the same level of efficiency? It still takes the same amount of time to process each individual order, but with two people at work, the orders will all be taken and sent on a lot more quickly.

That’s how bandwidth works. It’s not that the people taking orders are doing it any faster. Greater bandwidth is similar. The speed is the same but the process is faster because there are more resources available for the task.

This doesn’t necessarily mean that the more bandwidth you have then the better everything will work. You can actually invest in too much bandwidth. Back in our fast food outlet, picture this. Now there are three people behind the counter, ready at the cash registers. But there’s only one customer. Two people are doing nothing. In computing, if you have more bandwidth than you need, you’ll be spending money on it that you don’t need to spend. Clearly, this is something no business wants to do.

How bandwidth influences your operations

Too much bandwidth is a waste, but bandwidth problems can seriously impact on the efficiency of your computer system, because it affects the number of tasks that can be done properly at the same time. But it’s not just the number of tasks alone. Most operations only use a small amount of bandwidth, but there are some that are a lot hungrier. Among them are VoIP, backup process and webinars.

The good news is that if you have insufficient bandwidth there are things you can do without investing in more. You can tweak the system so that less important tasks are deprioritised, freeing up bandwidth for more important ones. You can schedule tasks so that the ones that use up a lot of bandwidth happen after hours, or whenever you’re least busy. Backing up, which takes up a lot of bandwidth, is one thing that can be scheduled to run overnight. But the starting point is knowing how much bandwidth you have to work with.

For estimating bandwidth requirements you have several options. To get a broad picture of what’s going on, you can use an online tool that will look at your bandwidth and compare it with the traffic on your network. Speedtest.net is one such resource you could look at. If you run (or are thinking of implementing) one of the bandwidth-chewing processes, like VoIP, a broader network evaluation is a good idea. You could start with the Mean Opinion Score (MOS) and Quality of Service (QoS).

MOS is a score specific to VoIP that used to be calculated on the basis of user feedback. Now it’s created by an algorithm that analyses three metrics: listening quality, conversational quality and transmission quality. The results are scored from 1 to 5, on a scale that runs from ‘incoherent’ to ‘excellent’. All businesses will obviously want high quality calls and a high MOS score. QoS is another tool for evaluating VoIP-related bandwidth and performance.

Jitter refers to choppy sounds or lag that indicate there are delays in data packets being delivered to a network. Minimal jitter means consistent delivery of data packets.

When information moves from place to place within a system there’s a delay, only milliseconds long, in the process. This should be consistent. Measuring the ping rate will help you identify if a ping is taking too long to go to the internet and back to your network. If it does, and you have what is known as an MS spike, you will probably need to take action.

For VoIP and other broadcasting, some data compression can be useful, but can compromise quality. With VoIP you can compress the call to save bandwidth, but the audio quality may suffer. If you opt for compression, use it minimally and ensure that there’s enough bandwidth for times when your system is at peak usage.

Do you need a network evaluation? At Quikteks we can identify and resolve bandwidth problems. To learn more about how we can help your business function more efficiently, give us a call at (973) 882-4644.